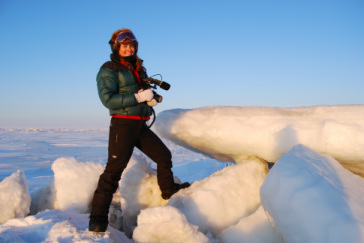 Owner
Sarah Betcher spent several years traveling extensively around the world researching how indigenous cultures utilize local wild foods for their nutritional needs, while also working in Alaska as an environmental educator in remote wilderness areas. After receiving a masters degree in Cross-Cultural Studies at the University of Alaska Fairbanks with a focus on ethnographic film and Alaska Native Studies, she became the owner of Farthest North Films. Sarah specializes in creating media that communicates across cultures, especially showcasing Alaskan indigenous traditions.

In addition, Sarah has been awarded several contracts editing and filming for the Smithsonian Institution’s Arctic Studies Center; the University of Alaska Fairbanks, funded under the National Oceanic and Atmospheric Administration, the National Science Foundation, the National Park Service and the United States Department of Agriculture; as well as the Athabascan Fiddle Association, Aqqaluk Trust and Tlingit Readers Inc.

Sarah is an award-winning recipient of a Greenpeace documentary film competition with her work titled "Sea Ice Secure", exploring sea ice use in a changing Arctic landscape.

Through all the time Sarah has spent filming in rural Northwest Alaska, she is honored to have been given the Inupiaq name Miiyuk.
Filming in Alaska