June 8-11th, 2022
Sarah Betcher produced the feature length film 40 Years of Celebration in partnership with Sealaska Heritage Institute. Details about the film premier showing, along with the live broadcast on KTOO, can be seen on the link below.
Event Details
June 8-9th, 2022
Ice Edge, produced by Sarah Betcher, was one of the 25 films selected as part of the World Whale Film Festival.
Click below to see details about the film screenings.
WWFF
October 12th, 2020

Click below to play Lamont-Doherty Earth Observatory of Columbia University's interactive open house game.
Virtual Science Adventure game
February 10th-14th, 2020
Monday February 10th from 3:30 - 4:45, members of the Ikaaġvik Sikukun project will present Ikaaġvik Sikukun: Bridging the Scientific and Indigenous Communities to Study Sea Ice Change. Panelists will each share their contribution to the project, including a promo film produced by Sarah Betcher.
Tuesday February 11th, Betcher's  Ikaagvik Sikukun: Indigenous Perspective of Climate Change film will be shown during the 3:30-4:45 film festival, followed by a Q&A.
Click below to check out the Alaska Forum on the Environment website for more information, including location.
AFE
September 26-29, 2019
Click below to view more Sharing Our Knowledge (SOK) videos from 2019 or the SOK website
February 28th, 2019
Sarah Betcher will discuss and show the teaser for the soon to be released Rising Whale: 1000 Years Unfolding feature film she is producing. Check out the Alaska Anthropological Association website for more information.
Alaska Anthropology Association
November 5th, 2018 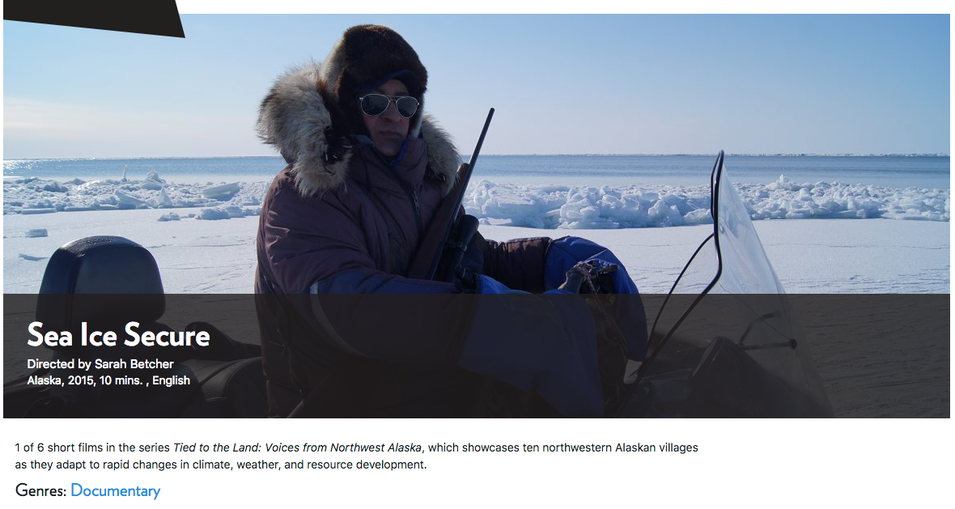 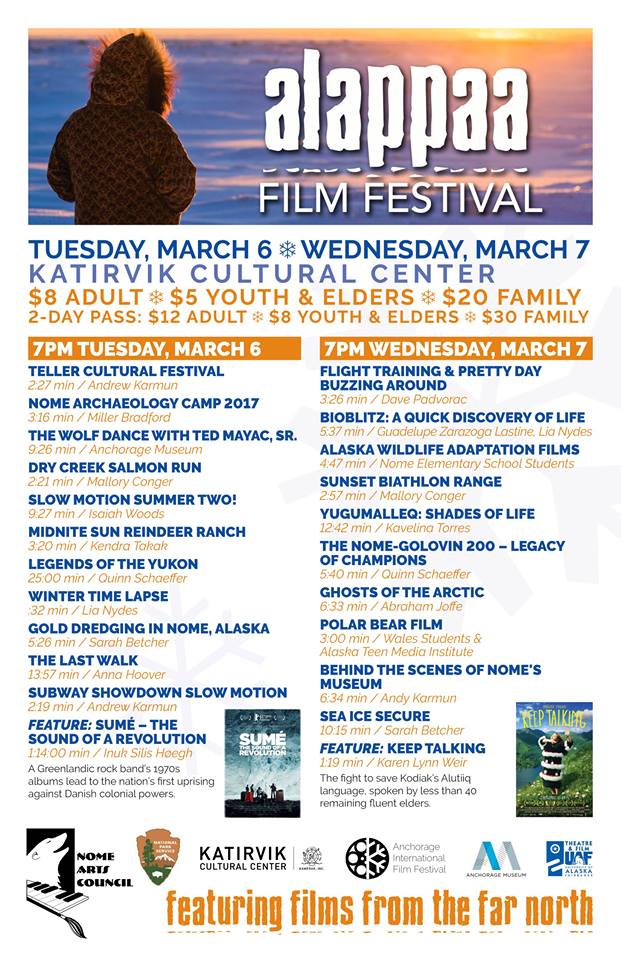 Two of Sarah Betcher's films, including Gold Dredging in Nome, Alaska and Sea Ice Secure will be showcased.
March 2nd, 2017

The American Association for the Advancement of Science (AAAS) Annual Meeting is the largest and most widely recognized global science gathering that brings thousands of leading scientists, engineers, educators, policymakers, and journalists from around the world.

For more information about the session that Sarah Betcher and team will host go to:
Session
September 22nd, 2016

“The Polar Film Fest is a showcase of some of the best films on the polar regions available on the internet.” – www. usapecs.wixsite.com

Sarah Betcher's film Counting on Caribou was selected as part of the People at the Poles themed films. For more information go to:
Polar Film Festival
September 21, 2016 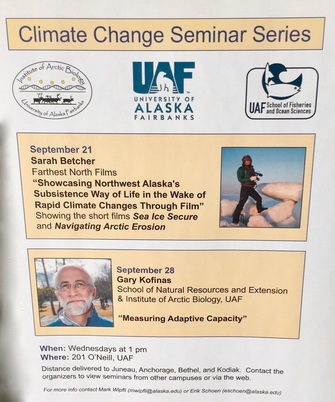 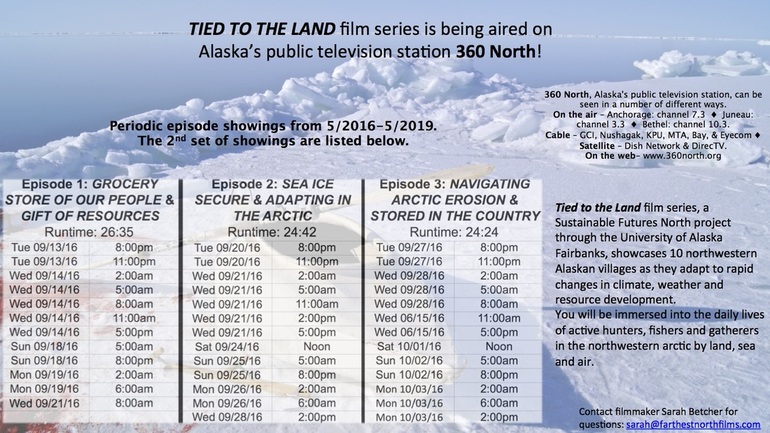 Sarah Betcher's talk and film showing titled TIES TO ALASKA’S WILD PLANTS: Preserving Traditional Ethnobotanical Knowledge Through Film Production will be held in the theater of the Alaska Native Heritage Center in Anchorage, Alaska on September 12th, 2016 from 9:45am-10:45am.
August 22nd, 2016
“You're invited to a screening of the film Counting on Caribou with filmmaker and producer Sarah Betcher on Monday, August 22, 2016 at 1:00 PM in the Gordon Watson Conference Room. This is an opportunity to view a film addressing local perspectives on a subsistence resource in the Northwest Arctic and participate in a discussion with the Alaskan filmmaker.”   -Zachary Stevenson 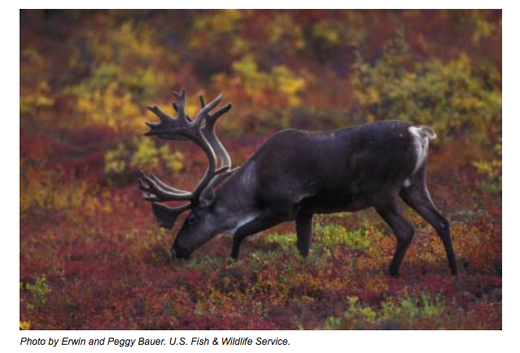 The location of the screening is being held at:
United States Fish and Wildlife Service
1011 East Tudor Road, MS 121
Anchorage, Alaska 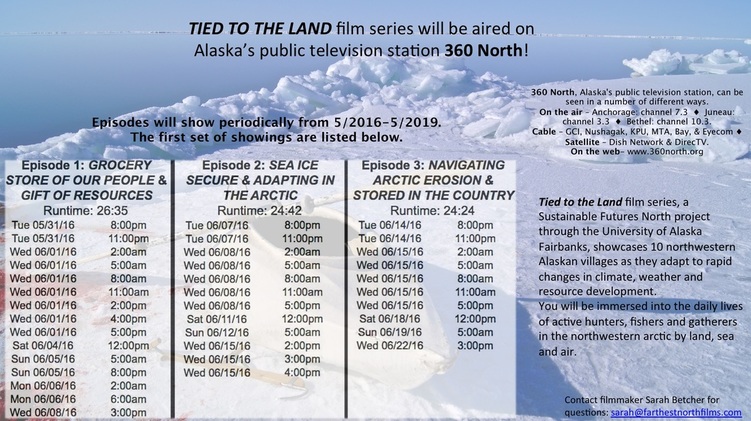 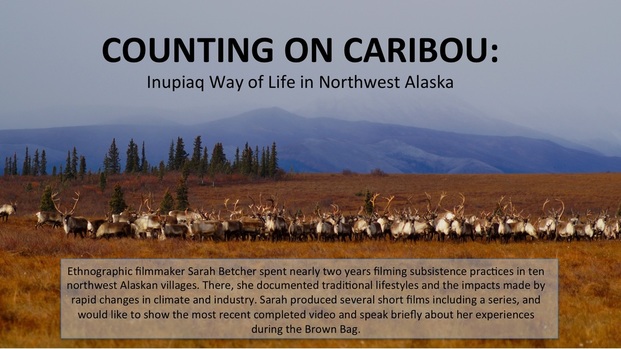 There are many speakers during this session. Sarah Betcher will be showing her newest ethnobotany film. The first talk of the session is titled:
Ethnobotany of Northwest Alaska: Preserving traditional knowledge and engaging Alaska native students in STEM.  - Sarah Betcher and Stefanie M. Ickert-Bond

Sarah Betcher will have flat screen display showcasing her film trailer of the film series
Tied to the Land.
March 14th, 2016 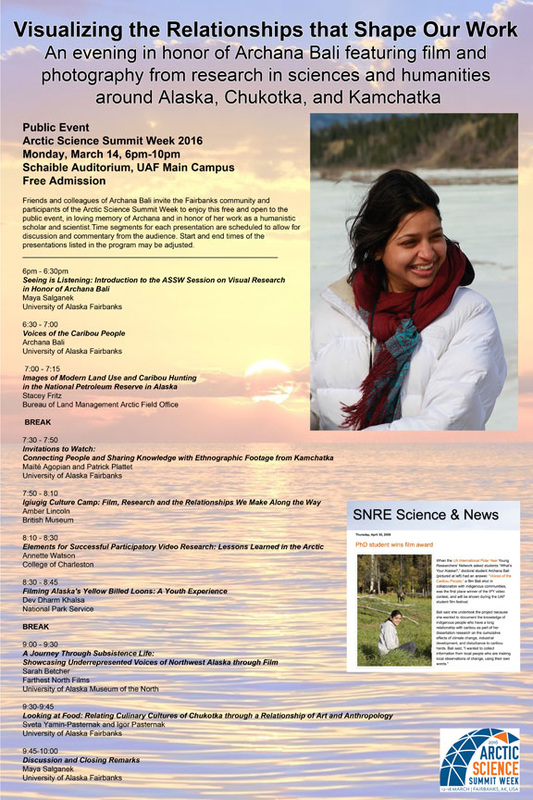 Sarah Betcher's newest film titled Counting on Caribou will have it's debut showing at this event.
March 5th & 12th, 2016 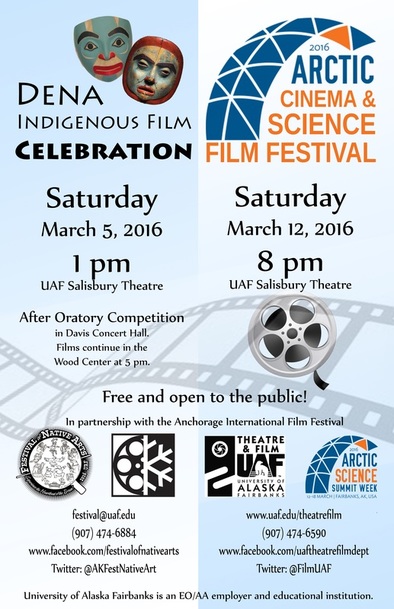 One of the films from the six-part film series Tied to the Land will be showcased at both these events.
March 10th-11th, 2016 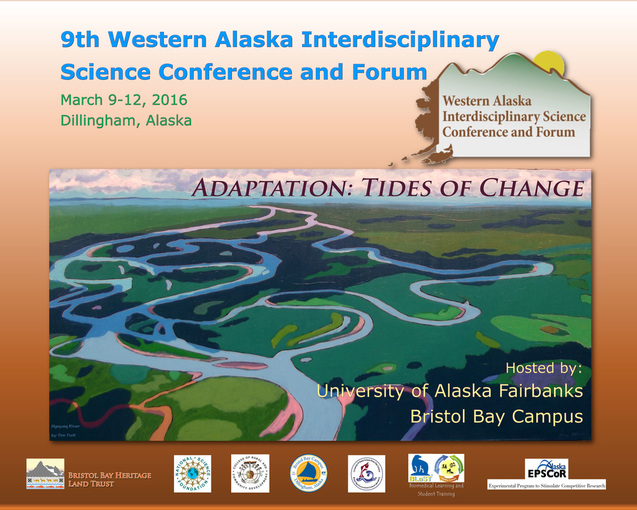 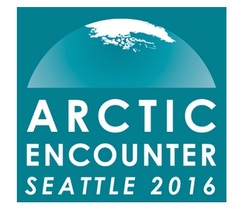 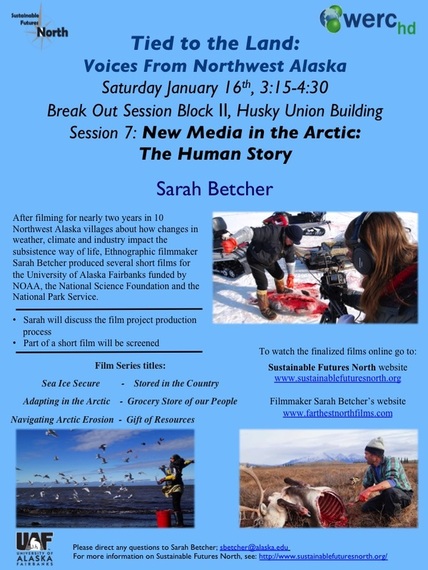 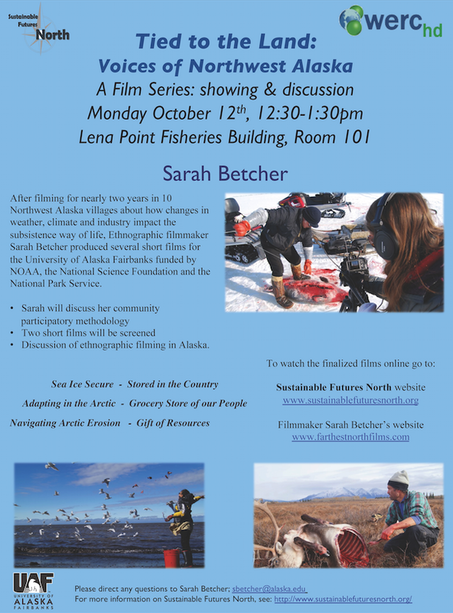 Sarah Betcher will be showing three short films and hosting a discussion about ethnographic filmmaking on April 15th from 3pm-5pm.
Presentation Flyer
For more information go to:
WAISC 2015
April 20th-23rd, 2015 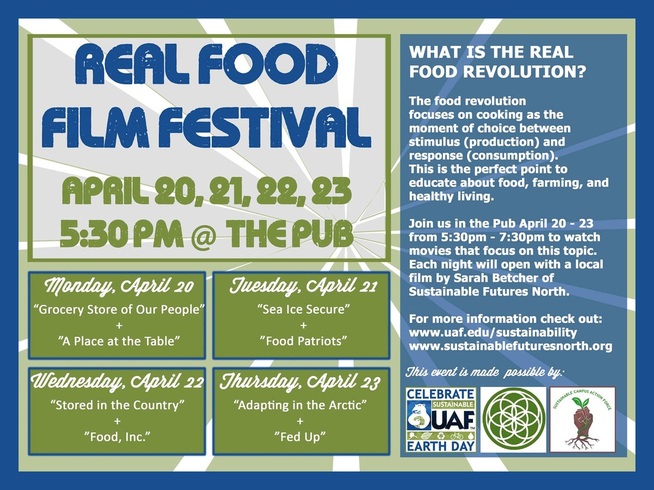 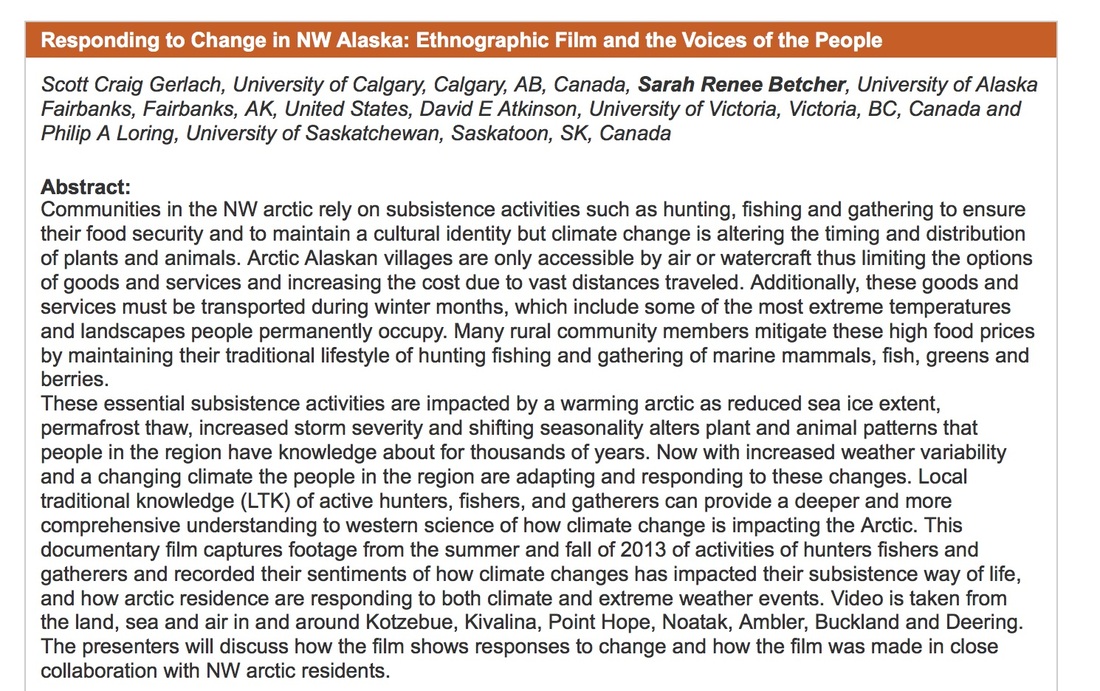 For more information go to:
American Geophysical Union Website
November 13th, 2014
Arctic Day: What is Hot in the Arctic
Poster session event showcasing research in the arctic
University of Alaska Fairbanks: Regents’ Great Hall
November 13th from 8:30 a.m.–12:30 p.m.
Many participants will be showcasing their research
including Sarah Betcher's poster and film shorts projected on a large screen 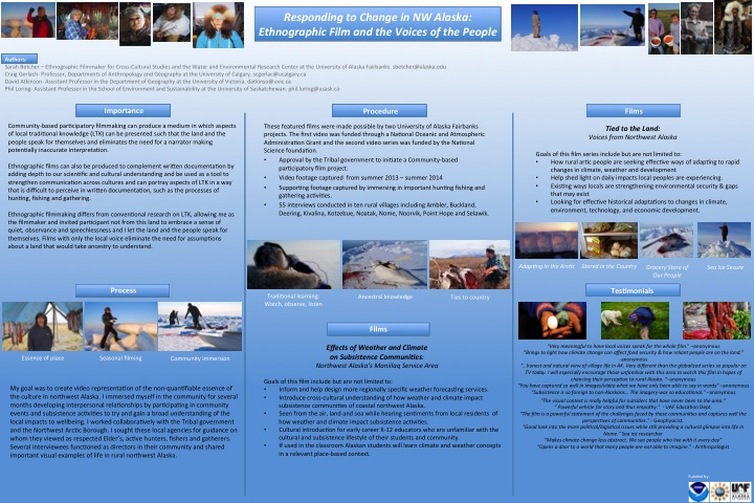 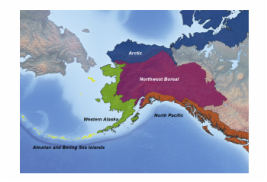 “Since 2011, the AK CSC and the five LCCs have worked together to advance our understanding of and response to the effects of climate change in Alaska and Northwest Canada. These efforts are helping resource managers and stakeholders better understand, adapt to, and plan for climate change. The conference will provide an opportunity for resource managers, scientists, and other stakeholders to highlight scientific progress to date, reflect on what has been learned, identify opportunities to increase our capacity and effectiveness, and develop strategic synergy for future work.” - https://csc.alaska.edu/events/climate-conservation-and-community
Effects of Weather and Climate on Subsistence Communities showing is November 5th at 2:40pm,
presented by Zach Stevenson

For more information go to: 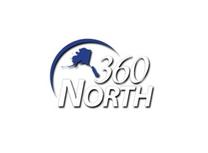 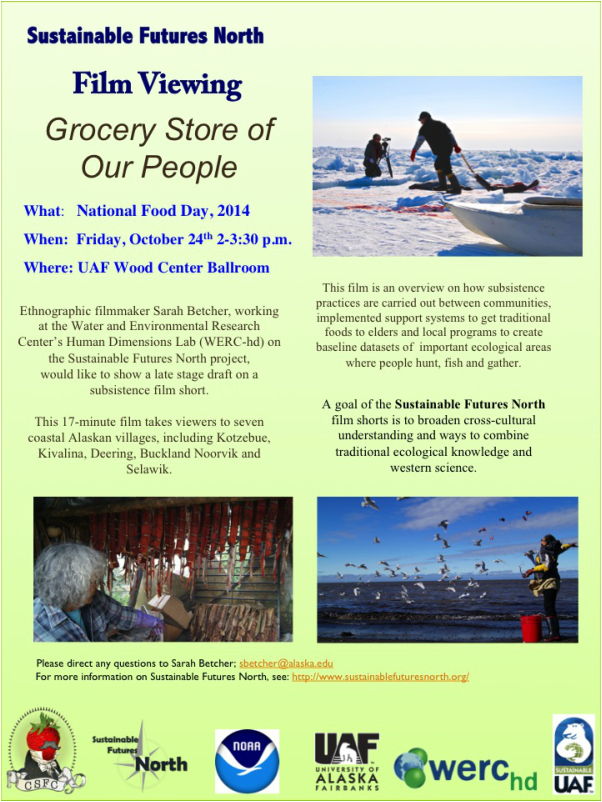 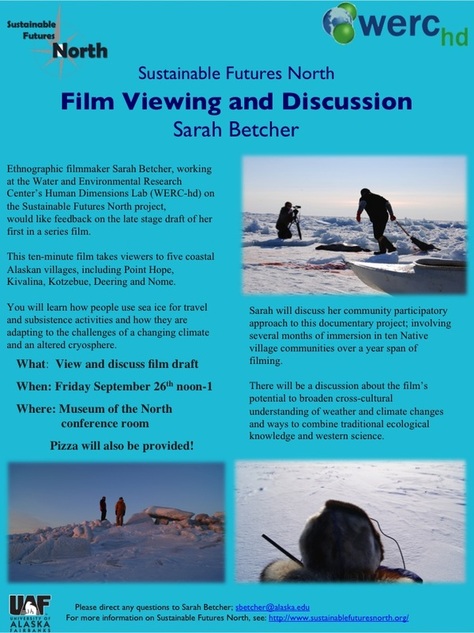 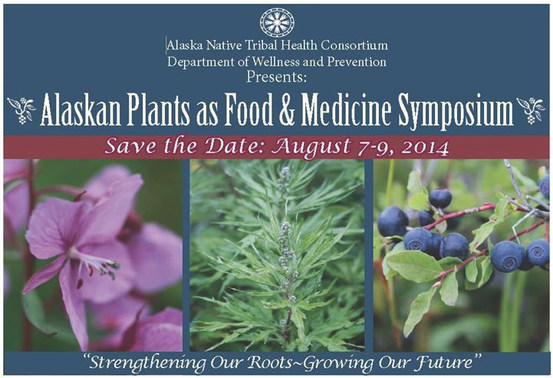 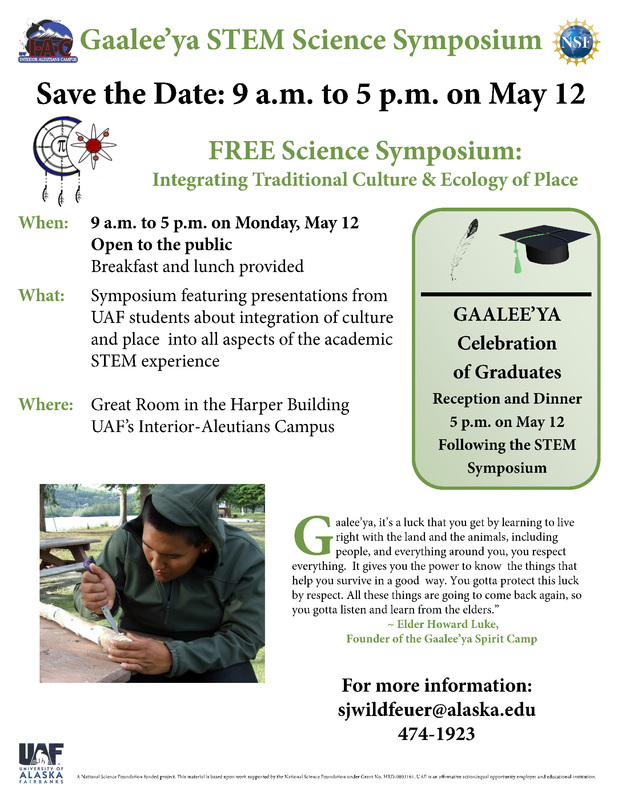 Interior-Aleutians Campus (Fairbanks)
4280 Geist Road
Effects of Weather and Climate on Subsistence Communities
showing is May 12th at 10:30 am and 2:30 pm
April 29th, 2014 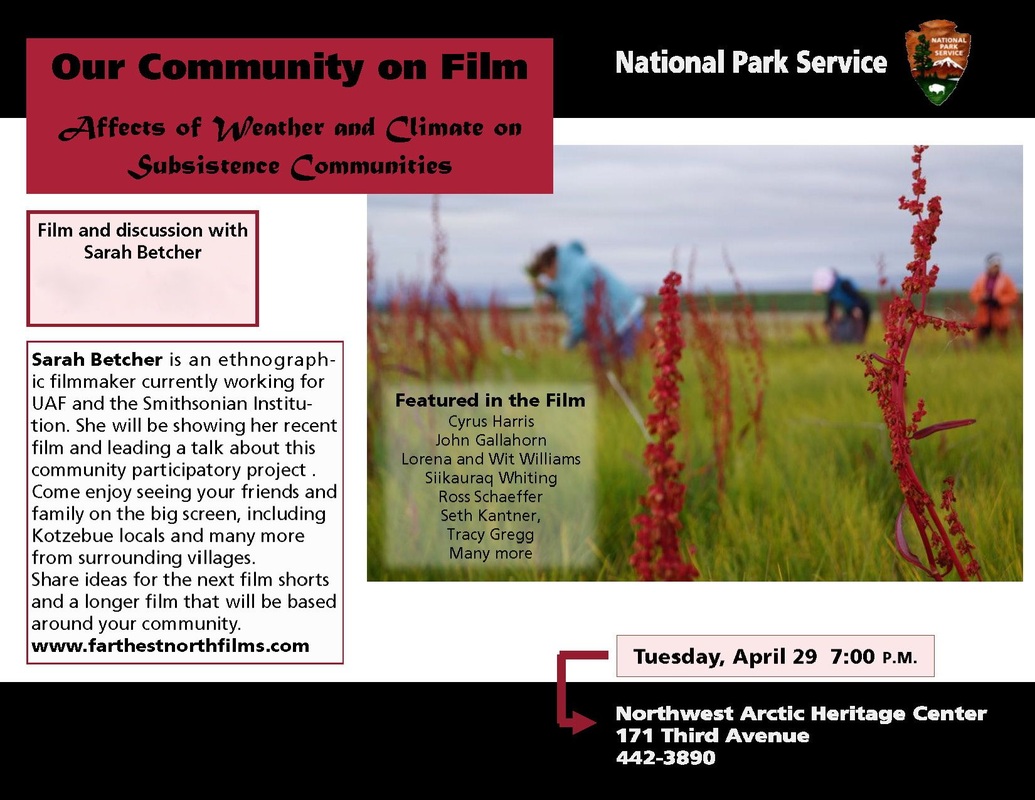 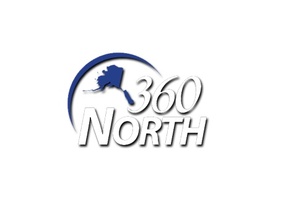 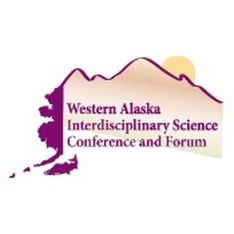 Description
Bringing together scientists, educators, community leaders, and members, as well as subsistence hunters and gatherers to discuss scientific issues relevant to northwest Alaska, focusing on the impact of global warming on the lives of residents of arctic Alaska. This conference will highlight regional scientific efforts and traditional knowledge providing an interdisciplinary approach to scientific inquiry and resource management. In addition to scientific sessions, the conference will include several workshops addressing topics relevant to life in northwest Alaska.

Sarah's talk called Film as a Means of Documentation is April 24th at 3:10pm.
Effects of Weather and Climate on Subsistence Communities showing is April 25th at 4:15pm.

For more information go to: 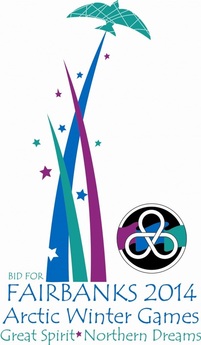 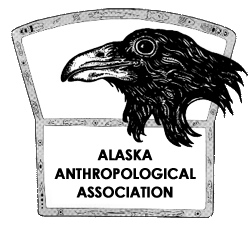 Film screenings on March 7th-8th from 9am-5pm will include
Effects of Weather and Climate on Subsistence Communities and Tradition in Tune. 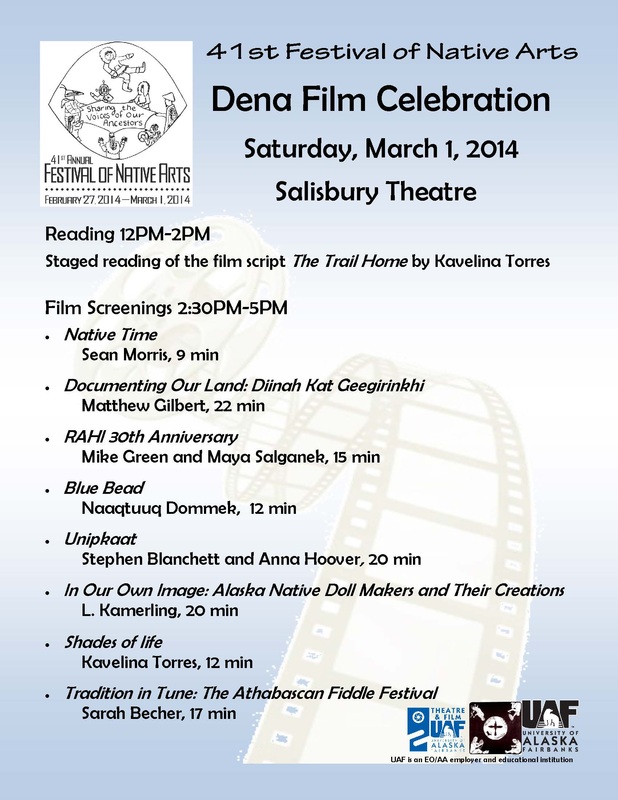